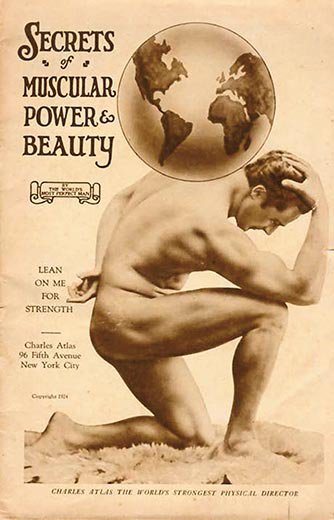 Charles Atlas was a scrawny kid, and the story of a bully kicking sand in his face at the
beach is said to be true.  After getting hold of one of Eugen Sandow's texts on physical
development, he embarked on a program that he gradually developed into the fairly unique
approach that he called Dynamic Tension.  (I knew a guy who was still using a Charles Atlas
course in 1965!)  The 1924 ad above is a classic that literally ties into his stage name, and
several experts have described Mr. Atlas' business as the longest and most successful
advertising campaign in history.  "In just seven days I can make you a man!"
Posted by Vintage Muscle Men at 2:30 AM