Third place and a career decision? 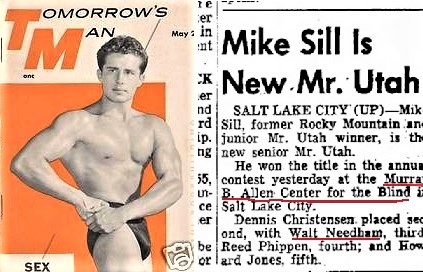 Walt Needham was already a college student at the University of Utah when he appeared
on this 1956 cover of Tomorrow's Man.  He was a good student and completed not only an undergraduate degree, but a PhD in clinical psychology.  After completing grad school, he
worked for several years at the County Hospital in Salt Lake City.  Many of you will recognize
the '56 newspaper clipping at right from my recent Utah Beef series.  Note that I underlined
Dr. Needham's name and the location for the contest.  Later, he became a major advocate for
the blind and made some incredible advancements as you will see in another post today.  Was
this just coincidence, or did he see something during that competition that had a lasting
impression on his character and career path?  Stranger things have happened.
Posted by Vintage Muscle Men at 2:30 AM