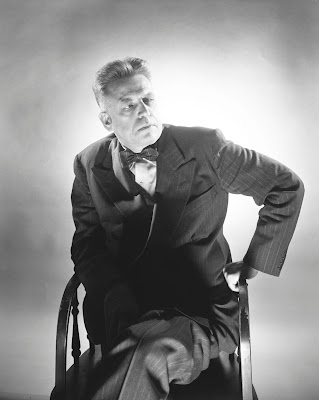 Yes, that's the Alfred Kinsey, America's first sexologist who scandalized post-war America with his frank and graphic descriptions of male (and later female) sexuality.  I'm still wading through a ponderous biography of George Platt Lynes that gives prominent mention of his involvement with Kinsey's research.  The two had several long interviews, and they were apparently comfortable with each other.  Kinsey had sex with a number of his male survey subjects, but so far I haven't found any mention of him having a go at it with Lynes.  Lynes did take this rather flattering photo of Kinsey, and he willed his collection of male nude photographs to Kinsey's institute.  Despite Kinsey's urging that he do so, Lynes never made an "action" gay porn photos.
Posted by Vintage Muscle Men at 2:30 AM