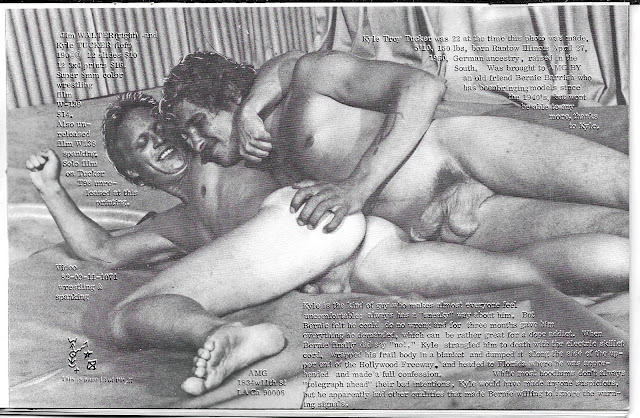 As many of you know, I had been working on a "Bad Boys of Physique Photography" series for some time, but had a setback when my Bad Boys file got corrupted in a computer crash.  Well, I got lucky, and the Physique Pictorial issues that Bill D so generously gave me had more than enough material.  So much, in fact, that it will take three series to put them all on.  We start today with the major felons, and future Bad Boy series will feature petty criminals and ne'er-do-wells.   I am summarizing Bob Mizer's printed overlays, but you should enlarge and read them if you can.  Our first major criminal model is Kyle Troy Tucker, shown bottom left above.  When his benefactor Bernie Barrish told him to get lost after supporting his drug habit for some time, Kyle strangled him with an electrical cord and dumped his body off the Hollywood Freeway.  According to Bob Mizer, everyone but poor Bernie saw this coming.
Posted by Vintage Muscle Men at 2:30 AM