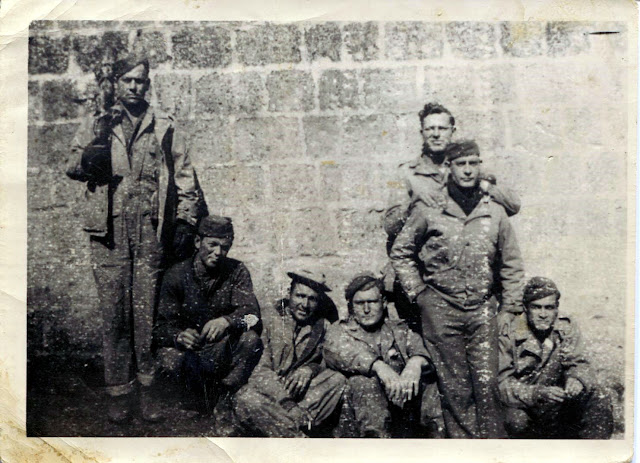 The Great Depression lingered into 1940 in rural Texas, and my beloved uncle, along with most of the men shown alongside him in this picture, joined the Texas National Guard to make extra money. Within six weeks after Pearl Harbor, he was off to war as part of the now famous Texas 36th Division.  My mother recalled the whole town seeing them off, and she said, "We cheered and waved and encouraged them, but as soon as they were out of sight, nearly every man, woman, and child broke down and cried in the street.  We knew we'd never see a lot of them again."  She was right.  The 36th fought in North Africa, Italy, the invasion of Southern France, and the final push into Germany itself.  The picture above was made in Italy in the winter of 1943-44.  The men were gathered along a sunny wall to stay warm when a buddy snapped this photo.  Of the seven men in this picture, three were killed in action and one was taken prisoner.  Two of the survivors were seriously wounded, including my uncle who was wounded twice and awarded the Bronze Star.  This is his Purple Heart, along with his combat badges: 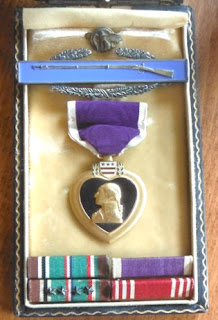 Most of those who returned, including my dear uncle, suffered from what we now recognize as PTSD.  Their sacrifices went on for decades, and today we stop to remember them.  Take another look at the faces of those men in the picture and think about what they went through.  Then be thankful.
We owe them everything.
Posted by Vintage Muscle Men at 8:24 AM

Email ThisBlogThis!Share to TwitterShare to FacebookShare to Pinterest
Labels: mili