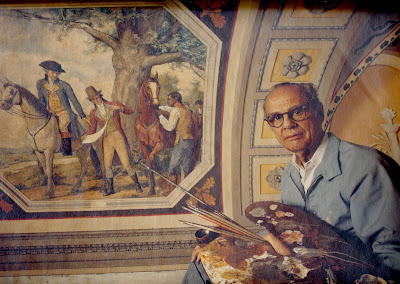 Allyn Cox (1896-1982) was the son of Kenyon Cox.  The elder Cox, while a more than competent American  artist, became better known in later years as a teacher, critic, and writer.  The younger became one of the most pre-eminent muralists of his (or any) generation, having placed important works in everything from post offices to university buildings to the U.S. Capitol where he was the resident muralist from 1952 to 1972.  Allyn Cox had the habit of drawing the men in the studies for his murals and paintings in the nude, adding clothes to the finished product.  Part one of our double feature shows some of those studies, while part two shows some finished nude works.
Posted by Vintage Muscle Men at 2:30 AM