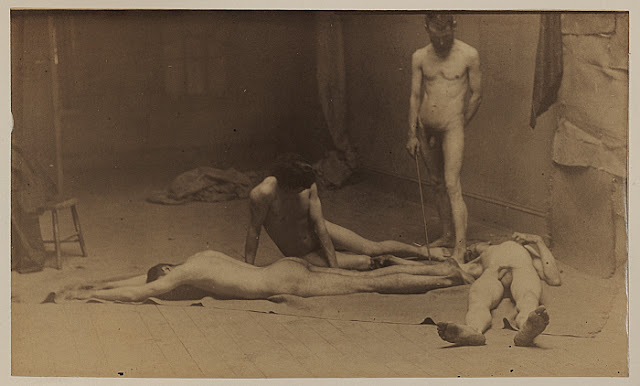 It's New Years Eve as I type this, and I was researching Thomas Eakins earlier today when I came across a group of 20 photos attributed to "Circle of Eakins" from the Grafly Collection of the Clark Art Institute.  I had heard of the designation before, but this time there were notes accompanying the images.  These were made in 1885-86 and were most likely taken by Eakins' students under his supervision. They were all intended as studies and not meant to be stand alone pieces of art, but that is indeed what they have become generations later.  Two of the less inspiring (imho) prints from this collection were sold auction for $4000 and $4500 to help fund the facility to hold them.  Our first picture is undoubtedly some sort of scene, but I don't know what that might be.
Posted by Vintage Muscle Men at 2:30 AM