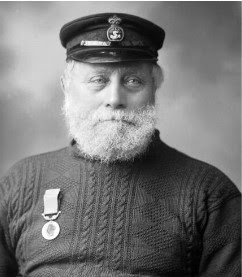 James Haylett (sometimes spelled Hallett) was awarded the RNLI Gold Medal by King Edward VI in 1902 at age 78.  A long serving member of the Caithness-on-Sea lifeboat crew, he had retired to reserve service a decade earlier, having saved dozens of lives over the years.  When the Caithness lifeboat, the Beauchamp, foundered on rocks near shore in a gale after making a rescue run on the night of 13 November, 1901, Mr. Haylett went into action.  Among those he rescued that night were his grandson and son-in-law, but two of his sons were lost.  When asked why he kept going back into the waves to pull more men out, he said, "Caithness men don't turn back."
Posted by Vintage Muscle Men at 2:30 AM