It's Good to Have Friends 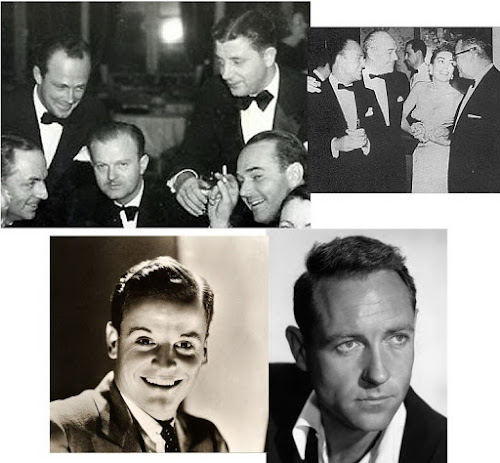 Joe Tiffenbach's bio on IMDb, a movie industry history site, says that he met William "Billy" Haines through a friend while at USC.  Haines was a popular 1930's film actor who changed his career to interior decorating rather than meet the studio's demand that he give up his gay lover Freddie Shields.  Joan Crawford had Billy decorate her home and called the couple's relationship "the happiest marriage in Hollywood."  They remained together for life, proving Miss Crawford correct.  In the left top photo above from 1935, Freddie is at  upper left while Billy is at lower right. They are shown again in the top row with Miss Crawford and her then husband, Pepsi Cola CEO Alfred Steele at a party around 1958.
One evening at Haines and Shield's home, Joe met actor/agent John Darrow and his lover Charles Walters who was an acclaimed director (The Unsinkable Molly Brown, Easter Parade, and High Society, among others) with lots of connections.  (Darrow is above at lower left, Walters at lower right.)  There are conflicting reports about how long the Darrow/Walters relationship lasted, with some saying that they broke up around 1950, about the same time they met Joe Tiffenbach.  Other stories say they remained a couple for life.  The interesting part here for us is that a couple of old time Hollywood gossip websites say that both Darrow and Walters had a romantic relationship with Joe Tiffenbach.  We could probably speculate endlessly on the particulars of such relationships, but however it went, there is general agreement that Walters got Joe into the movie business via a job in the mail room at 20th Century Fox shortly after he graduated from USC.
Posted by Vintage Muscle Men at 2:30 AM