Sandow gets plastered . . . plus a few strays 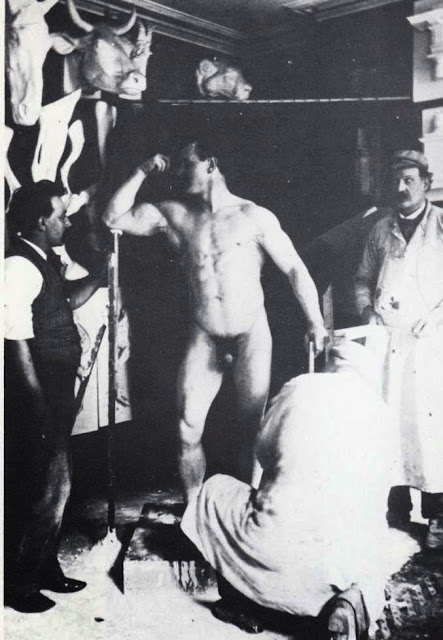 This is the only known frontal nude photo of Eugen Sandow (1867-1925), the German strongman and showman. He became a guru of fitness and male beauty when he moved to London in 1889, and he traveled the world attracting huge crowds of male and female fans.  While in the USA for an extended time in the early 1890s, he lived with his musical accompanist who was rumored to be his gay lover.  These rumors were reinforced when Sandow's wife burned all his personal letters and papers upon his death and buried him in an unmarked grave.  (A fan later provided a handsome marker.)  Sometime around 1900, he agreed to be cast in plaster for a statue in London, and that session is the subject of most of our photos today.  This seems to be the start of the process.
Posted by Vintage Muscle Men at 2:30 AM