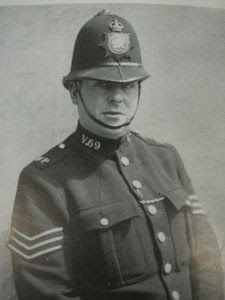 Harry Daley (1901-1971) was a London Metropolitan Police Constable who is one of the most unlikely and fascinating characters from gay history I have ever come across.  He was an openly gay policeman at a time (1925-50) when any sex acts between men were illegal.  When asked why he never tried to hide it, he said,  "A fox can't be chased if he won't run."  Harry became an unlikely member of the influential Bloomsbury Group when he chatted up playwright J.R. Ackerley on the doorstep of Ackerley's Hammersmith house while on duty and ended up going inside for a romp in the hay.  Afterward, the two discussed classical music, theater, and avante garde art.  That led to introductions to and affairs with E.M. Forster, Edward Sackville-West, Duncan Grant and others.  Busy guy.
Posted by Vintage Muscle Men at 2:30 AM