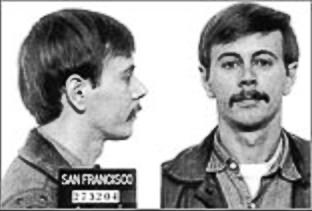 David Hurles (born 1944) is better known as Old Reliable, a photographer who managed to far exceed his one-time mentor Bob Mizer in terms of bad boy models.  In fact, Mr. Hurles specialized in jailbirds, rough trade, street toughs, hustlers, and other "lowlife" types.  His career lasted from about 1975 to the early 1990s when an eye injury and the advent of the internet put an end to his success.  I haven't featured his work until now for two reasons.  First, I generally have a cutoff date of 1975 for my blog, but I've made exceptions before.  Second, he required his models to produce erections for the camera, and I don't post material with those.  I did manage to find some photos I could use, though.  At last report (about three weeks ago) Mr. Hurles was a popular resident of a state sponsored nursing home in LA.  I'm using his San Francisco mugshot because somehow it seems appropriate.
Posted by Vintage Muscle Men at 2:30 AM