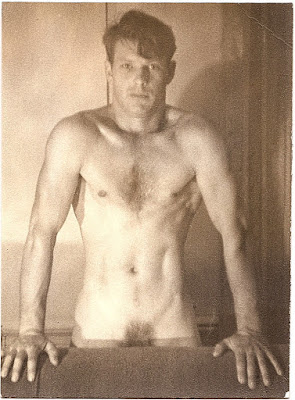 When one goes looking for non-nudes or G-rated photos by Denny Denfield, the pickings
are quite slim.  Why?  Probably because as an amateur who did photography for personal
enjoyment, Mr. Denfield did not have to worry about the draconian legal measures taken
against those who publicly displayed or commercially distributed such material.
Oddly, Denny Denfield stopped his nude photography in 1967, about when it became
legal to do those things, for reasons I haven't been able to discern.
Disclosure:  I cropped a large white margin from this picture to make it
fit the blog page better.  I did not alter the central image itself.
Posted by Vintage Muscle Men at 2:30 AM