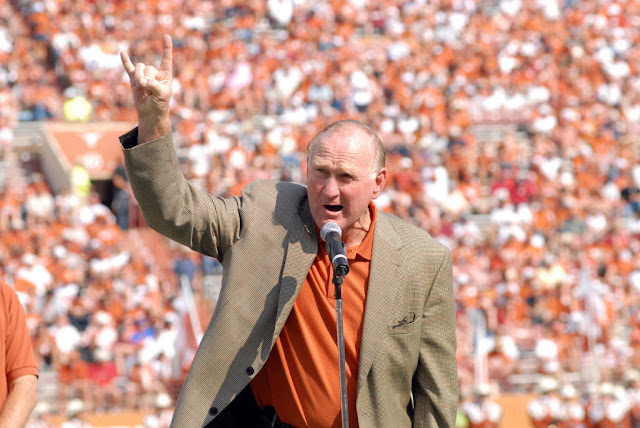 Mr. Nobis never forgot his Alma Mater, the University of Texas.  He was an active
member of the alumni organization, the Texas Exes, and was welcomed back on campus
many times.  A talented UT defensive player was once asked how he dealt with the lack of
recognition that defensemen typically get. His reply?  "They let me wear Tommy Nobis'
jersey for one game at the end of my best season.  That was enough for me."
Some people bleed Orange and White.  I know because I am one.
The Accolades, Just a Partial List:
San Antonio Jefferson High School
Football:  All-City, All-District, All-State
Track and Field:  All-District Shot Put
The University of Texas Longhorns:
National Champion Team 1963
All-American 1964, 1965
All-Southwest Conference 1963, 1964, 1965
Outland Trophy 1965
Knute Rockne Memorial Trophy 1965
Maxwell Award 1965
#60 Reserved for Honorary Use
Texas Sports Hall of Fame
Atlanta Falcons NFL:
First Round Expansion Draft Pick
NFL Rookie of the Year
All-Pro 1967, 1968
Pro Bowl All-Star Game 1966-68, 1970, 1972
Atlanta Falcons Ring of Honor
Georgia Sports Hall of Fame
Founder, Tommy Nobis Center for the Disabled
Joseph P. Kennedy, Jr. Award for Special Olympics

I'm including this emblem because the NFL Hall of Fame is the only major award that has not been awarded to Tommy Nobis.  Why?   Atlanta Journal-Constitution columnist and Hall of Fame voter Furman Bisher wrote, "There isn't much more one can say about Tommy Nobis. In the glow of a winning team, where he would have been a star on the isolated camera, he would already have been residing in Canton. It's not a Falcons thing, it's a Nobis thing, and here is a man who lives up to all the ideals I would establish for admission to the Pro Football Hall of Fame."  Mr. Nobis is nominated for the 2023 induction, so maybe he will make it this time.  If you follow such things, email your favorite sports writer and say, "Hey, it's time for this guy to get in."
Posted by Vintage Muscle Men at 2:30 AM